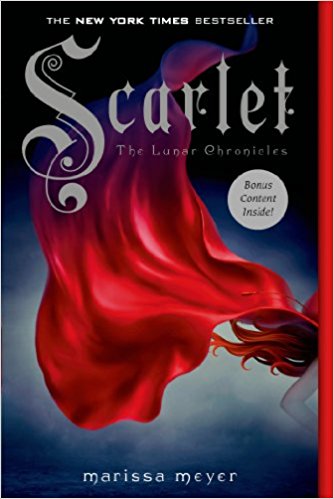 Somehow, I never reviewed Cinder. No idea how THAT happened. So without further to-do, here is the review of the second book in The Lunar Chronicles, Scarlet. I really don’t know how it took me so long to actually read these books. I saw Cinder on Amazon often enough, but the cover sort of scared me out of reading it. Never judge a book by its cover, as the saying goes. It was Nadine speaking about it at the OYAN Winter Workshop that finally caused me to decide to bite the bullet and purchase a copy. Hats off to you Nadine. Thank you. 😊

From the back of the book:

Cinder is back and trying to break out of prison―even though she’ll be the Commonwealth’s most wanted fugitive if she does―in this second installment from Marissa Meyer.

Halfway around the world, Scarlet Benoit’s grandmother is missing. It turns out there are many things Scarlet doesn’t know about her grandmother, or the grave danger she has lived in her whole life. When Scarlet encounters Wolf, a street fighter who may have information as to her grandmother’s whereabouts, she is loath to trust this stranger, but is inexplicably drawn to him, and he to her. As Scarlet and Wolf unravel one mystery, they encounter another when they meet Cinder. Now, all of them must stay one step ahead of the vicious Lunar Queen Levana.

Quick Summary: The Lunar chronicles is Sci-fi, but earthy. Everything (so far) takes place on the Earth or Moon. And unlike Star Wars there are no galactic empires/weird planet names/alien planets to remember. Everything is down to earth (no pun intended!) and real. Marissa puts interesting twists on the fairy tales that are so familiar to us, but we can still see the original among her world—which is pretty cool.

Characters 5/5 ~ We see quite a few new characters, including Throne, Scarlet and Wolf. I loved how the new characters became interacted with the old (this is always super cool) While I liked getting to know and follow Scarlet, Cinder is by far my favorite. Even the most minor of characters feels like they belong, and are not flat. And even with their little page time, you feel like you know them, that’s how well they are written.

Plot 5/5 ~ Amazing plot structure, though it did feel a little slow towards the middle of the book, then picked up about the last hundred pages.  Marissa did a good job of tying things together with what we learned in Cinder. The amount of world building that went into this series is amazing. I can’t imagine how much thought and care went into it.

Writing/Dialogue ~ Oh, goodness. There is no good way to express Marissa Meyer’s writing. It’s so good. You will have to read it yourself. Don’t let the cover scare you. As for dialogue, Carswell Thorne’s humor and Cinder’s sarcasm add some much-needed comic relief to a tense time.

Inappropriate Content: ~ There are some descriptive scenes involving wolves that might be uncomfortable for some people to read.

Have any of y’all read Scarlet? What did you think?